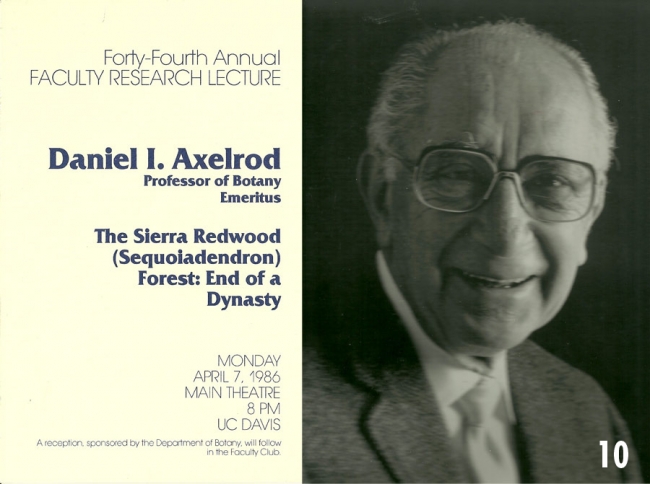 Whether one chooses to call Dan Axelrod a paleobotanist, phytogeographer, paleoecologist, or simply a botanist, he was a major figure among mid-twentieth century workers interested in the reconstruction of past environments. As one obituary put it, "his work was aimed at professionals in five areas: geology, plant systematics, ecology, evolution, and biogeography." Geographically, his emphasis was on western North American landscapes; temporally, on Tertiary deposits. But he dealt with all kinds of paleoecologies, ranging from desert to coniferous forests, and was especially interested in evidence bearing on the role of changing climates in the development of regional floras. He also wrote from time to time on life's past mass extinction episodes, conservation, and the relation of plate tectonics to
paleobotany and evolution.

Daniel Isaac Axelrod died suddenly and unexpectedly at home of a heart attack on June 2nd, 1998. He was 87. His personality, opinions, and papers have been memorable parts of the academic landscape for two-thirds of a century ever since his first publication in 1934, when he was a master's candidate at UC Berkeley.

"Ax," as he signed his letters and like to be called (his personalized license plate read "PROF AX"), was a paleoecologist who reconstructed past climates, vegetation types, and entire landscapes from fossil impressions of leaves, stems, cones, and fruits. His focus was on climate and vegetation change for western North America over the Tertiary Period. Peter Raven, Director of the Missouri Botanical Garden recently described him as, "the first person who matched modern plant communities with ancient, fossilized ones. He made a fantastic contribution to our knowledge of vegetation change over the past 40 million years."

Daniel Axelrod's work informed several generations of scientists on many continents. They, in turn, honored him with numerous awards: medals from the California Academy of Science, the International Paleontological Society, a research award from the University of California, and fellowships from the Guggenheim Foundation and the United States National Museum. He was also an elected member of the American Academy of Science. His work was aimed at professionals in five areas: geology, plant systematics, ecology, evolution, and biogeography. Ax was himself proficient in all five--an impressive achievement. He did not serve as thesis or dissertation director for many graduate students because he claimed that it took someone with that breadth to make significant contributions in paleoecology--and few post-graduates, let alone students, had such breadth. In this note, we emphasize his contributions to an understanding of modern California vegetation, but it's first important to go back in time and summarize some events that shaped his outlook.

Daniel Axelrod was born on 16 July 1910 in Brooklyn, New York, to Russian immigrant parents. He was the oldest of five children. The family moved to Guam, then to Honolulu, and finally to California by the time Ax was a teenager. Those childhood years in the rural tropics saw him develop a keen interest in natural history. As is true for many children of immigrants, he grew up with a fierce loyalty to his adopted country. In the 1930s he attended UC Berkeley, earning a B.A. in botany and an M.A. and Ph.D. in paleobotany. While a student, he spent summers mapping vegetation in California mountains for a project which today still stands as our best documentation of wildland vegetation prior to the pervasive changes from fire suppression, logging, and other stresses that an expanding human population imposed during the 20th century. He often referred to that summer field experience in later years, and his observations from that period directed and informed his research for decades afterwards.

In the war years between 1942 and 1946, he served in the Far East Air Force as a photo interpreter. His childhood in the South Pacific, coupled with his ecological training at the University of California, enabled him to translate aerial photographs of vegetation in terms of allied troop penetrability, disturbance by (and hence location of) enemy troops, possible locations for constructing air strips, and the assessment of bomb damage. He rose to the rank of Major and received a Bronze Star in connection with military operations in the Philippines which lead to General MacArthur's famous return.

After the war, he joined the geology and botany faculties at UC Los Angeles as an Assistant Professor, then later moved to UC Davis in 1967 as Professor. Technically, he retired in 1976, but this was merely the end of a first career lasting 38 years and the beginning of a second that extended for another 22. His second career was a time which brought him awards and international recognition.
Many of his publications took our understanding of entire ecosystems to new levels. During an era when most scientists became more and more specialized, Dan Axelrod retained an ecosystem-level focus and curiosity. He asked--and proposed answers to--large questions.

In 1969 he published a paper with UC Riverside geographer Harry Bailey, which applied Bailey's method of characterizing modern climates to the reconstruction of Tertiary climates. Bailey's method has not been widely applied by climatologists or biologists, but Axelrod used it to great advantage. He was able to show, in a graphical manner, how modern California vegetation types occupy different climatic niches and how these niches related to climate and vegetation changes during the past 40-60 million years. Bailey's method allowed him to become a sophisticated paleoecologist, able to reconstruct an entire ecosystem from a single fossil flora.

Ax turned his critical eye to many important vegetation types in California and the west. His repeated use of such terms as "Madro-Tertiary Geoflora," "Arcto-Tertiary Geoflora," and "Xerothermic period"--although considered oversimplified by some--allowed non-specialists to grasp the broad pattern of complex vegetation change in the Tertiary. Included in this phase of his career are publications on the development of the Madro-Tertiary geoflora, Mediterranean-type ecosystems in California, desert vegetation, conifer forests, a rare phase of mixed conifer forest with Santa Lucia fir, closed-cone conifer forests, temperate zone oaks of the new and old world, grasslands, chaparral, and summaries of the entire state. He also used his ecological skills to analyze causes for the extinction of dinosaurs (in work coauthored with Bailey) and the extinction of many species of large animals in the last several million years. His conclusions: increasing variation in temperature and a steeper latitudinal temperature gradient killed the dinosaurs; a combination of increasing aridity and cold winter temperatures killed large mammals (except in equatorial Africa).

He also turned his attention to biogeography, evolution, and systematics. Although early in his career he did not accept the concept of continental drift, by 1970 he had recognized that the balance of evidence favored the theory and he went on to use the theory to explain modern global biogeographic patterns in the evolution and distribution of the angiosperms in a series of papers, some co-authored with Peter Raven.

In summary, Dr. Axelrod addressed some very large questions for some very large territories. For the North American west he deduced where and when desert, grassland, montane conifer forests, chaparral and other Mediterranean vegetation had arisen. For the world he clarified how oaks (the genus Quercus) had dispersed and speciated, coming to dominate north temperate broadleaved forests; he hypothesized what caused massive animal extinctions at the end of the Mesozoic and Cenozoic eras; and he proposed an explanation for why angiosperms seem to have suddenly originated and come to dominate the modern landscape--what Darwin had called "an abominable mystery."

Ax also was a conservationist. He traveled the world widely, examining modern vegetation for links to past associations and climates. When recounting these trips to others, he inevitably would say: "Better see it now, it's going fast." He knew the value of natural wildlands as windows into the past, as well as remnant, relictual homes to a rich diversity of plant and animal biota.

On 16 July 1998, a day that would have been Ax's 88th birthday, a small group accompanied his widow, Marilyn Gayler Axelrod, and his step-daughter, Hillary Gayler, on a hike to the base of Elephant's Back, near Carson Pass. Marilyn chose this site to scatter his ashes for several reasons: the landscape was filled with woody plants whose past distributions he had charted in his publications; it had been a favorite hiking area for Dan and his family over many decades; and the Elephant's Back flora was to have been the subject of his work in the summer of 1998, supported by funds from the National Geographic Society awarded shortly before his death. It was an unusually warm and calm day. Gentle breezes blew his ashes into granite crevices, over to a nearby lake, up into the branches of white bark pines, among the inflorescences of purple penstemon and blue grass, and off into a sky that connected this small patch of Sierran California to the universe.