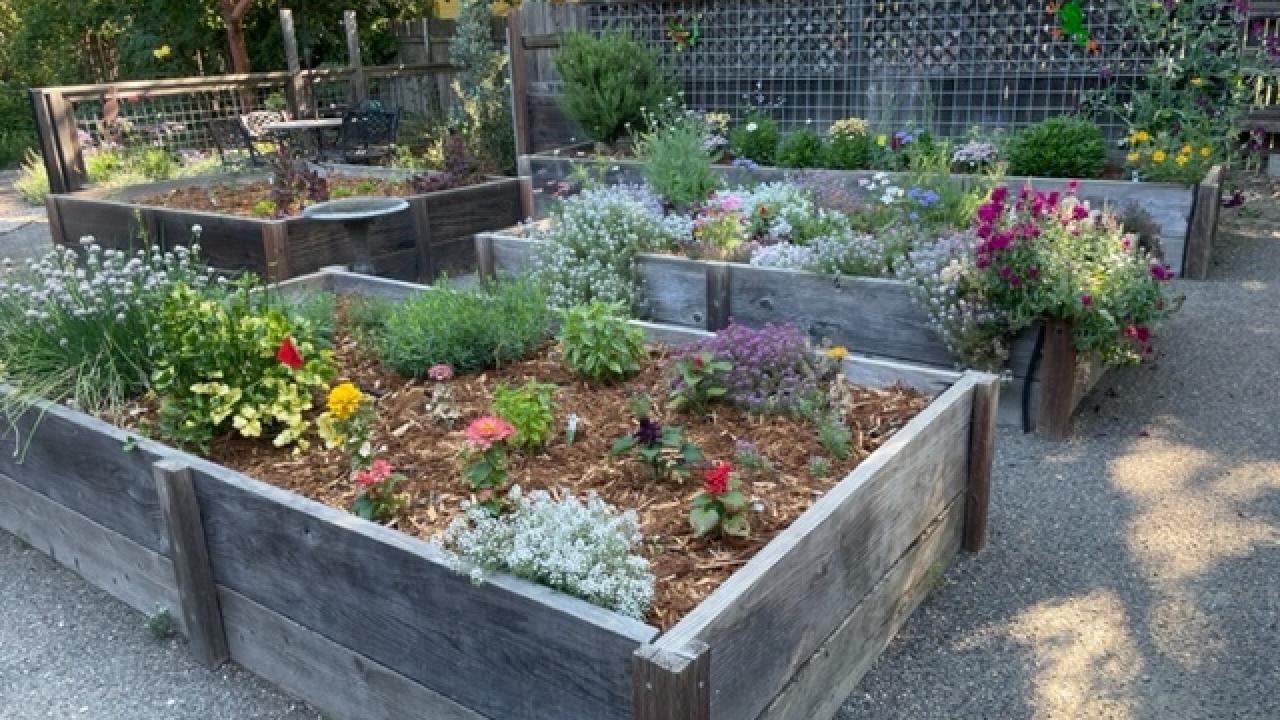 One day while glancing at the real estate ads, my husband, Jay, came across a house in Willowbank that sounded intriguing and that was having an open house that weekend.  We weren’t looking to move but we took a tour of the house and it was love at first sight for Jay. He was an architect with a special fondness for craftsman homes. I loved the house as well and we moved in early 2006.

The gardens, both back and front, were the least interesting thing about the property.  The front garden had two giant hackberry trees and a small, untended patch of grass.  Both hackberries were diseased and after one lost several major branches, we had both trees taken out. In consultation with Margo Anderson, we redesigned the front garden.  Note the bear sculpture in the photo. It was a favorite of our grandson, as Jay played a game with him where he’d take him around the yard “hunting for bears." Wonderful memories!

The evolution of the backyard happened over time with no particular planning.  We both liked to garden and loved plants. We volunteered in the Arboretum and worked at the plant sales where, if we saw an interesting plant, we’d buy it and find a place for it.  We enlarged the patios, defined the lawn area and the border of the garden, and had a metal gate made to divide the two areas of the yard so that we could contain our dog.

Jay liked trellises and built them in both the back and front gardens. We planted wisteria in front which is spectacular in the spring. He built the raised planters off the screened porch for our vegetable garden so that we didn’t have to bend over. The raised planters off of our master bedroom were filled with the dirt generated during our bedroom remodel. In the area by the creek, Jay planted a grove of redwood trees which he carefully tended. When several elm trees died, he used the stumps for a platform and built a tree house for our grandchildren.

This year, 2022, I hired a friend of my daughter to convert the lawn in the backyard to something more drought-tolerant. He just completed the project consisting of a decomposed granite path around the perimeter of the yard, flagstone paths, stone planters and a small fountain. I enjoy watching the goldfish in the little pond.

Most of the yard is planted in drought tolerant plants except for a woodland garden under the pistachio tree where there are some of my favorite plants—Lenten rose, camellias, daphne, Japanese maples and coral bells. Another favorite is Abutilon — there are several in the back garden. I love the delicate veined flowers.

The garden will always be a work in progress — removing plants that don’t perform well or that I tire of and adding plants that are intriguing. It’s a labor of love!